Before starting, I apologize because I do not speak very well in French.

My name is Rosanna Cosentino from Acta Progetti Company; I am an archivist and I have been practicing this profession for 25 years. I have the honor to be the archivist who cataloged and organized the archives of Anne Ancelin Schützenberger.

I had this assignment of work by Marco Greco and Maria Cristina Sidoni, from the Moreno Museum Association, to which Anne left her archives. Colleagues Corinna De Sole and Benedetta Gigli worked with me

During the summer of 2017, I also had the pleasure of knowing Anne personally: I was invited by Hélène, I went to meet her in Argentière. While I was trying to tell her all the work we were doing on her archives, Anne held my hand and said: "Very good! …Thank you! ". It's a wonderful memory.

I would like to say a few words about Anne’s archives, which were transferred to Turin in some lots from 2015 to 2018 and from different places: Paris, Nice, Argentière Hélène Schützenberger, , sent us a text entitled The archives of my mother, Anne Ancelin Schützenberger, in Turin. Why? How? She sent it just after the death of Anne. The text explains very well the reasons for the choice of Turin and the method of work of Anne, which we can find in her papers and which introduces us in the world of a charismatic woman with a strong and tenacious character.

The archives have arrived in large boxes, where they are still today: about 60 linear meters of documentation from the 1930s to the present day. Our work began in 2016.

At the moment, the first cataloguing of all the archives is almost finished: we have about 2400 files and about 2700 pictures, as well as bibliographical material, audio and videodocuments, computer supports (USB keys, Hard Disk, diskettes).

The collaboration with Hélène Schützenberger has enabled the archival structure to be developped in sections and series that respect the characteristics of Anne's archives and history. Hélène also helped us to know and recognize a multiplicity of actors we meet in Anne's papers: family members, friends, collaborators, patients, colleagues, and we were able to give the correct position to the relative documents, thanks to her precious advice.

We have dedicated the first part of the archives to Anne's personal and family documents: Hélène came twice to Turin to speak with us and see how we worked. On these occasions, she was also generous in telling personal events in her family's history to help us in organizing her mother's personal documents. We also asked her to think about what should be removed from the consultation to respect Anne’s privacy.

Following parts are relating to Anne's career and her several activities, including her professional e-mails. I tried to organize these series on Anne's different spheres of activity.

It was hard to organize the part of the professional documents because of the relevant presence of copies of the same document / article: as Hélène explained to us, Anne printed several copies of the same documents, e-mails, etcetera, to have them in all places she worked (Paris, Nice, Argentière… and all around the world). We decided to keep this copies to highlight Anne's method of work.

A separate section is devoted to her bibliographic material: numerous magazine extracts, draft editions, book chapters, journals, newspaper clippings and magazines. When it was possible, we have included them in the relevant files by subject. For others documents, a bibliographic section has been created as an appendix to cataloguing.

I would like to mention the photographic section too. It includes pictures from the 1930s to the beginning of the 2000s. As for the e-mails, we have found a mixture of public and private spheres: pictures of Anne during conferences, congresses and group therapy conduction, and pictures of Anne with her family and friends. Thanks to Hélène’s help we could write a description of the subjects, because most of the pictures are without indication (on the date, the place and the names of the people who appear there).

Our archivistic work is not finished yet. We still have to correct the virtual grouping of the subjects treated in many files: by comparing all the databases that we have created during different periods, by physically reorganizing all the documents that we have to enumerate again before inserting them in the final files. Our aim is a production of a complete final inventory to facilitate consultation for study and research purposes.

We sincerely hope we can work and conclude as soon as possible in order to put this archive at the service of the public, because we esteem it a scientific archive of great interest.

As many of you already know, Anne’s archives have already revealed its potential as a tool for studies and research: thanks to the well-known references of the documents and the determination of Maria Cristina Sidoni, Hélène Schützenberger asked French TV archives a film considered as lost: a footage with JL Moreno and Anne Ancelin Schützenberger conducting an introduction to psychodrama for actors of French Television, shot in 1956 and directed by Roberto Rossellini. The film, restored by the Ivrea National Archives of Corporate Cinema, was recently presented at the Cinémathèque de Paris during the festival Toute la mémoire du mond , and in Torino (Italy), in the out-of-competition documentary section of the 36th TorinoFilmFestival.

…and as archivists of this project, we are proud to have helped to find it.

I thank you all for your kind attention. 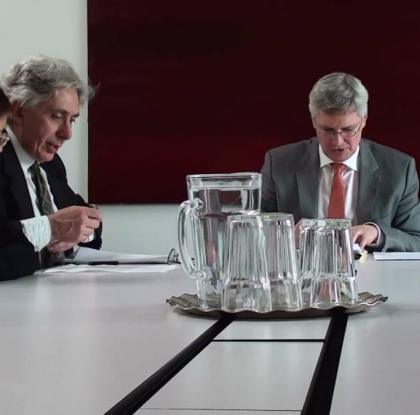 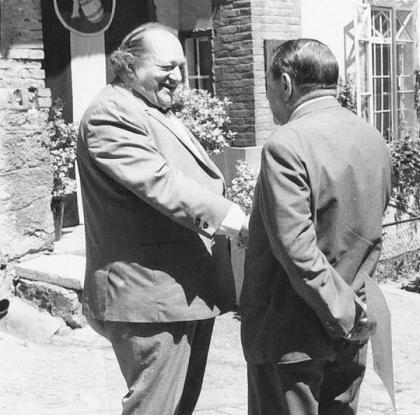